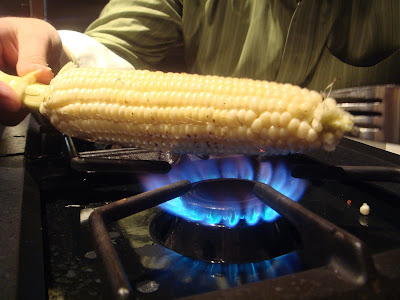 When we rolled into Mendocino we were coming off 100+F temps in the East Bay and Summer felt like it was in full effect. However, upon hitting the coast the the cool fog enveloped us and soon we were firing up the pellet stove and pulling on sweatshirts. We were inspired by the juxtaposition of Summer and Winter and decided to transform some fresh corn into a belly warming bowl of soup using this recipe as a starting point. I husked eight ears and then made the last minute decision to 'grill' two of them over the flame on the gas range. 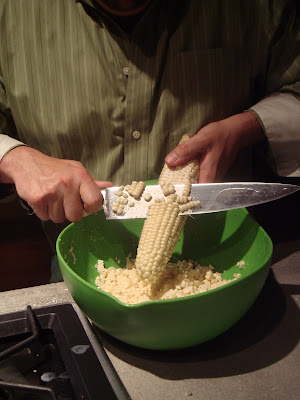 Slicing off the kernels with a large kitchen knife. 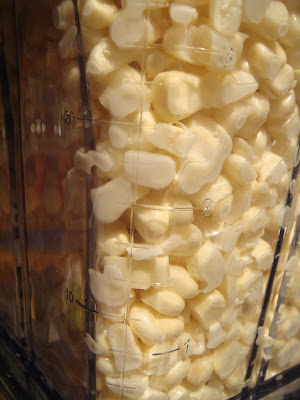 Close-up of corn staged in the Vitamix.
Captured on video -- Liquefying the corn.
The total yield of corn was 5 to 6 cups which was added to the vitamix blender with a splash of water. After mixing on high for about 1 minute the blended corn was placed in a sauce pan with about 2 tablespoons of butter, a few pinches of salt, and some fresh cracked pepper. The soup was brought to boiling over medium heat and cooked for about 7 minutes, stirring frequently. 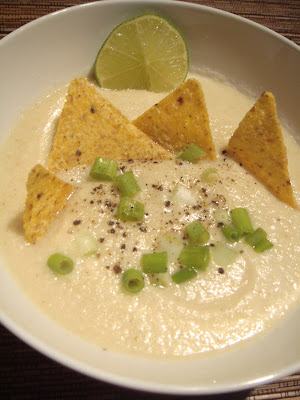 The beauty in this dish is in the garnish. Some corn tortilla chips give it a great contrast of soft/creamy and crunchy textures. The scallions gave it a green earthiness and the fresh lime a bright acidity. The only thing that was missing was a little sour cream or crumbled queso fresco.
Posted by Justin at 4:00 PM