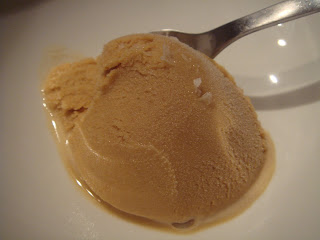 1) if you live in the San Francisco Bay Area, take a trip to Bi-Rite Creamery and try theirs.
2) If you live in Columbus, Ohio, take a trip to Jeni’s and try hers:
3) If you don’t have a local creamery that makes it, try Haagen Dazs Reserve Fleur de Sel with tiny inclusions of caramel filled chocolate.
4) Or you can make your own! 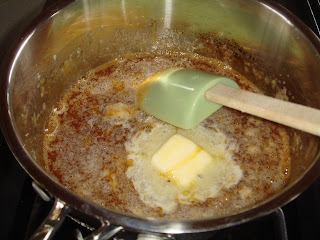 We decided to use David Leibowitz’s recipe here to make this version. David has a praline that he adds but we decided to be purists and just make the ice cream sans praline.
For this recipe, you actually make the caramel by heating sugar and butter and cream in a saucepan. Be careful not to let it get too dark, but dark enough to have a good flavor. 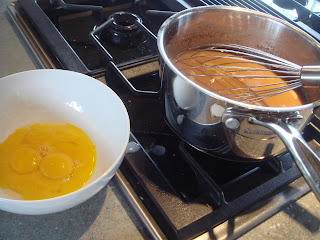 Then, using this base, eggs and milk are added to make a custard that is chilled before churning. 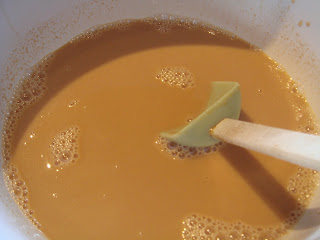 The custard looked like this before it went into the ice cream machine. 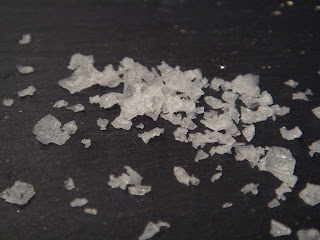 For salt, we added Maldon sea salt, known for its large flaky crystals. Because the crystals are so big in physical size, we considered that a teaspoon of Maldon salt might be give us less salt per volume than a finer grain salt- so we added a smidge more. Turns out for my taste, I think we could have added even more! The recipe cautions NOT to use regular salt like Morton’s- it will overpower the recipe. Try a coarse grade of sea salt or kosher salt.

A quick note on sea salts. Sea salts can have various mineral and sodium content depending on the region and the level of standardization when it is made (impurities can be adjusted or removed). All sea salts aren’t the same, however when dissolving it in large volume, the subtle notes may not be as pronounced as compared to a sprinkle on a bite of food. In this case, we were most concerned at making sure there was the right level of salty flavor- not looking for distinct notes. 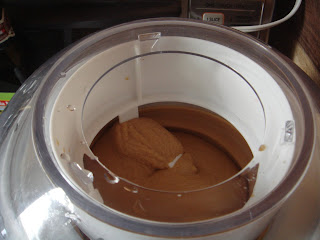 We prepared the ice cream and put it in the Cuisinart ice cream maker to churn. 25 minutes later we had a lovely soft, salted caramel ice cream. We let it freeze longer in the fridge and it firmed up nicely. With an extra sprinkle of Maldon on top, it was delicious. It definitely was high on the caramel flavor and as I mentioned, I would consider adding bit more salt as it wasn’t salty enough for my taste. But the extra sprinkle easily did the trick! Enjoy!
Posted by Lauren at 9:50 AM