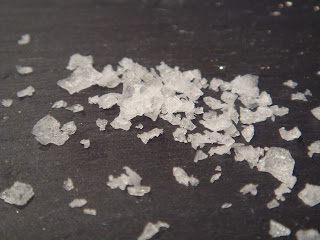 Salt (sodium chloride) is one of the simplest and the most flavorful ingredients in food. What is it doing for food and why is it so hard for manufacturers to reduce sodium in food products?

Throughout history, salt was often used to preserve foods. In fact salt was once so valuable, the Romans were paid in salt, hence the word salary! For a great book about the history of salt, try Salt: A World History by Mark Kurlansky.

While salt is a functional ingredient in some products, today salt is commonly used for its flavor and flavor enhancement properties. Salt provides more than just salty flavor, it is also potentiates and amplifies other flavors in food and reduces bitter flavors. The love of salt is learned and this acquired liking isn’t easy for consumers to give up. It is estimated that Americans consume 3500 to 4000 mg of sodium per day instead of the recommended 2400 mg of sodium per day. The salt ingested in the diet comes from both processed foods and salt added by the cook/consumer when flavoring to taste.

Currently, no single ingredient is available that identically matches the taste and functionality of salt--which makes it difficult to replace without drastically affecting taste in processed foods. Very few ingredients elicit true saltiness. For sweetness, another basic taste, there are many compounds and sources of sweetness from natural sugars to artificial sweeteners. Unlike sweetness, and it typically takes a mix of several other ingredients such potassium chloride, spices, and flavors to replace some of the flavor of salt. These substitutes aren’t exact matches either--potassium chloride, a very common salt replacer, has a bitter off-flavor for some people.

But what about sea salt, pink Himalayan salt, fleur de sel, Hawaiian salt and other artisan salts? These premium salts come from unique sources and have different amounts of sodium and other natural minerals. These less pure compositions give them distinct flavors and colors. However, salts can be standardized and purified--you can buy sea salt that is as pure as traditional salt.

Another difference seen in artisan salts can be the crystal size. Be aware of the crystal size of your salt when measuring it by volume for recipes (e.g. teasposns, tablespoons). The larger crystals don't pack as well and teaspoon for teaspoon you deliver less salt with larger crystal salt than the standard granulation. 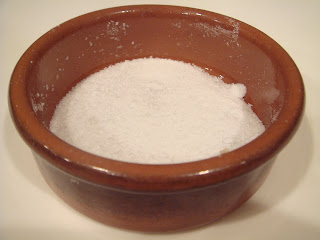 So, what do we use for salt? We use the standard fine Morton's for baking, we keep Diamond Kosher salt in a small dish next to the stove for flavoring dishes as we cook. We also have an assortment of premium salts for special occasions. But no matter what we use, we have a lot of respect for this simple yet incredibly flavorful ingredient.
Posted by Lauren at 8:24 PM