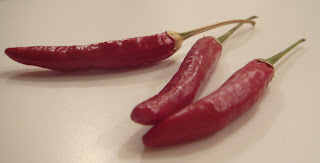 (Thai chili peppers from the garden, about 50,000 - 100,000 Scoville)
Do you ever wonder what makes chili peppers spicy? How hot is the heat from a habanero? A jalapeño?

Well, the answer to the first question is capsaicin. That's the name of the compound that gives peppers their heat and causes a burning sensation in the mouth. In fact, there is a scale called the Scoville scale to measure the level of capsaicin and therefore the level of spiciness in peppers. The original scale was developed in the early 1900s with a panel of tasters. The ground peppers would be dilluted with water until the tasters could no longer preceive spiciness. The more water needed to dillute the pepper, the higher the number. While more precise analytical methods using chromatography have been developed today, they still use the Scoville unit in honor of Wilbur Scoville, the pepper pioneer. An extract of pure capsaisin has a value of about 15,000,000 to 16,000,000 Scoville. When formulating a food product with medium or mild spiciness a producer may literally add only a drop of hot pepper to a large batch.

Scott Roberts has a handy chart of peppers and food products that cover this Scoville scale. You'll see the hotest pepper, the Bhut Jolokia (also known as the "Ghost Chili"), can register about 1,000,000 on the Scoville scale . . . that's over 200 times hotter than the jalapeño! The Green Bell Pepper comes in on the lower end (below 100 Scoville).
Posted by Lauren at 10:54 PM