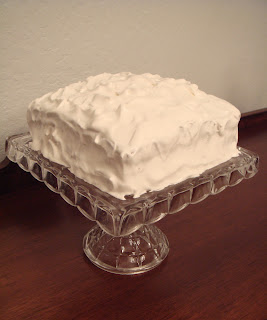 The Lady Baltimore cake was the very first cake I made by myself out of my mom's 1970s Betty Crocker cookbook and in the spirit of nostalgia, I wanted to make it again. 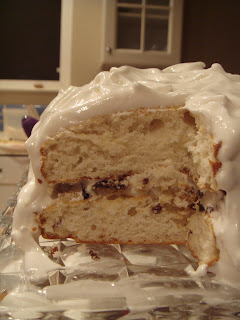 A Lady Baltimore Cake is a Southern specialty two layer cake with a white crumb (no egg yolks used) and a boiled frosting made with egg whites. The filling of the cake also has chopped walnuts, figs and raisins. This recipe from Martha Stewart and Amy Sedaris soaks the raisins in rum. For an in depth history on this classic cake, go to this link from The Old Foodie. 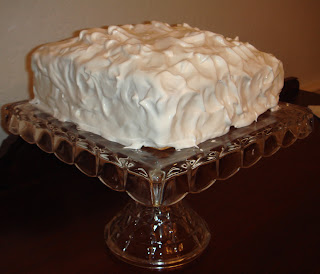 This cake was my first baking experience when I was 13. The cake was dry and dense but at the time I didn't have cake flour and I didn't make the special fruit and nut filling. I boiled over the seven minute boiled frosting and in a panic, I called my great-aunt E to help me clean it up and show me how to make the frosting properly. Thank goodness for great-aunt E!

My great-aunt E passed away this summer at the age of 97. We were very close and I was so pleased to receive her cut-glass cake plate. This was an occasion to remake this cake to see if my improved baking skills and proper ingredients would make this cake blossom.

And not to spoil the ending but...the cake was still pretty terrible. I would never recommend this for a first time baker because it uses a million bowls (ok, three), it has a beaten egg white step (which I messed up and had to redo), and it just didn't taste great. Can a recipe go out of style? I think this one just did! 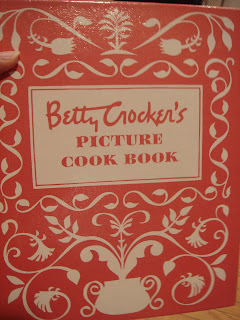 But, this was a traditional cake that was a staple recipe for cookbooks, including this remake of this vintage Betty Crocker. Just for fun and to remind ourselves what the 1950s housewives were making, here's the step by step: 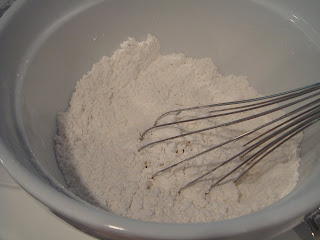 1) I mixed the dry ingredients which were pretty standard: Softasilk cake flour, baking powder, salt and also in a separate measuring cup, milk and vanilla extract.

2) I creamed the sugar and shortening, that's right, shortening. Hey, it's a vintage recipe and so I followed it. 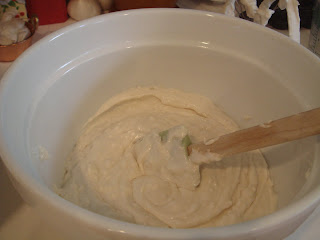 3) Then I added the dries and the milk to the creamed shortening and butter. I then transferred this to a clean bowl and washed the Kitchen Aid bowl. 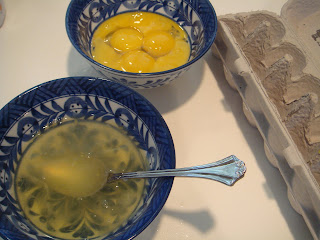 4) And now, my least favorite part, separating and beating the egg whites. 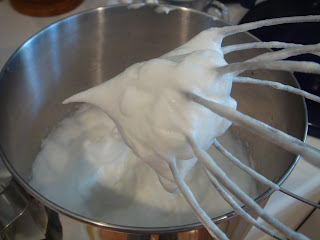 This is how the egg whites should look. This photo is from the second time I did this. As I mentioned, I messed this up and overbeat them the first time. 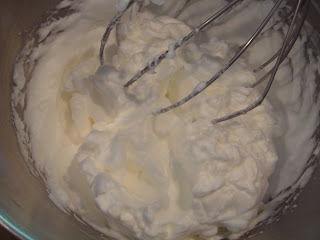 Here's the overbeaten photo. This part can't be fixed, just has to be redone. I felt bad that it was a waste of egg whites. 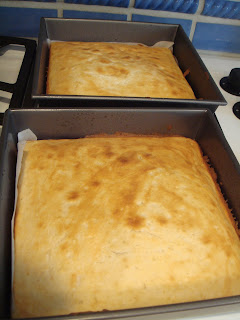 5) Then I folded everything together, put it in the parchment paper lined and greased square pans, and popped it in the oven until done.

As for the frosting, this took 4 more egg whites that were beaten to peaks. 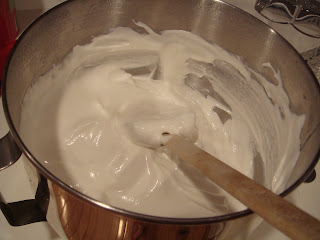 A sugar syrup was boiled to 234-238 degrees F and whipped into the egg whites with a bit of salt and vanilla. It had a lovely gloss. 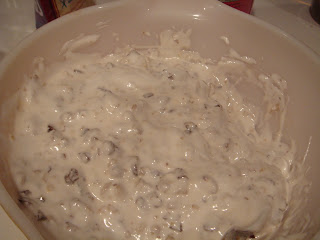 I took about a third of the frosting and mixed it with chopped walnuts, chopped figs and chopped raisins soaked in rum- yeah, it looks like tartar sauce, just like Martha said when she made it in her how-to video! That went into the middle of the layers. 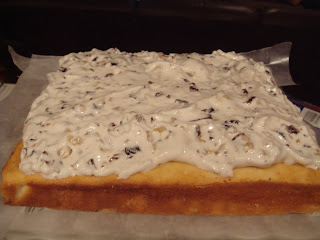 The filling was spread and then the top layer placed, flat side down. 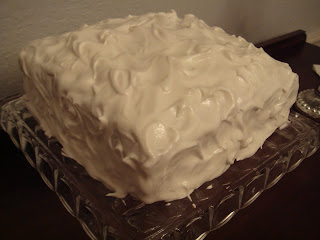 I spread the rest of the plain frosting making decorative peaks. And it was done. Phew!

So, here's what I learned from this vintage cake recipe:

1) Tastes have changed. I don't see this cake making any books' top ten list in this day and age. I really liked the frosting but the nuts and dried fruits just didn't add the right kind of flavor.

2) Women used to jump through a lot of hoops to make cakes like this. I can see why the cake mix was a huge hit after making this cake! What a commitment!

3) It sure looked beautiful. 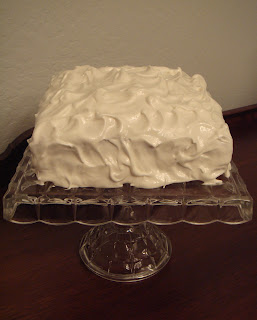 So, I'm really glad I made this cake even though it didn't taste very good because it was a wonderful opportunity to remember my great-aunt E and her help with my very first cake initiative. If it wasn't for her, I might have been more discouraged and not learned to explore baking, which is a passion for me.

It also reminded me that not everyone likes the same thing and that some recipes just aren't great. I thought it was my lack of baking skills when I was 13 that made this cake not so tasty. Turns out, I just didn't like it. However, I am looking forward to making many many more cakes to grace this elegant plate.
Posted by Lauren at 6:00 PM