The Last Taste of Summer and A Hint of Fall: Peach Brown Sugar Ice Cream 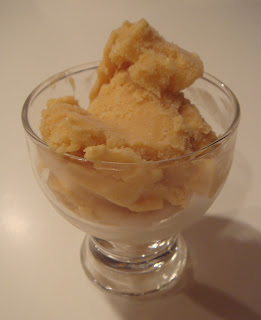 Ah, the last tastes of golden summer fruit are fading away and the warm spiced flavors of fall are simmering. That was the inspiration for this Peach and Brown Sugar ice cream made with touches of nutmeg and cinnamon.

Don't be fooled, the short paragraph of instructions for this recipe from Epicurious actually entailed quite a few steps. So don't commit unless you're ready. 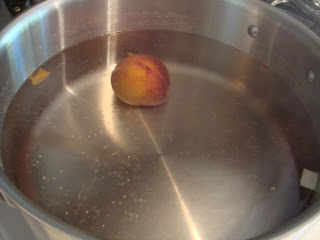 Step number one: peel the peaches. This is my new favorite way to peel peaches that are going to be cooked: blanching them. It's so easy- just boil a pot of water and put the peaches in for a minute or so. 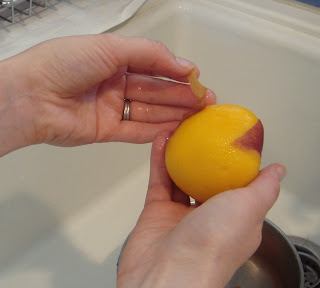 Rinse them under cold water and you can use your hands to peel the skin right off. 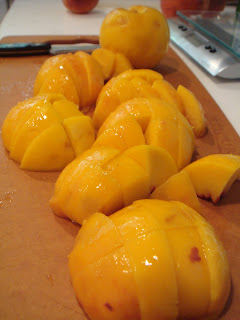 I love this because you just remove the skin leaving all of the peach flesh for your pie or ice cream! 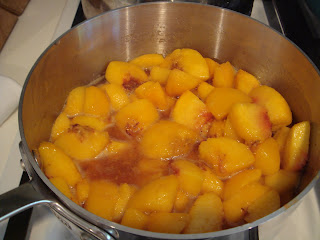 Step two: cook the peach with a bit of sugar and water. Mmm. That's all I can say. 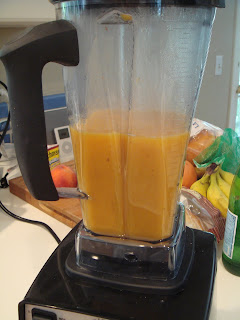 Step three: blend the heck out of those peaches with a blender and put it through a sieve. Now, thank goodness we had the Vitamix which effectively pulverized most of the peaches... 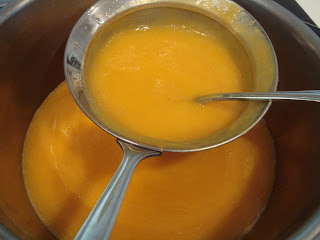 so that it went through the sieve without much waste. 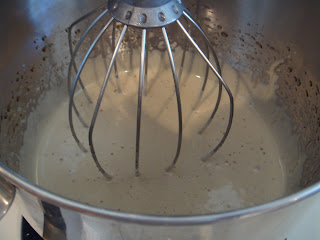 Step three: beat the egg yolks and egg until frothy and add some dissolved brown sugar. I doubted the ability of this mixture to thicken and turn pale. But it did with the whipping power of the Kitchen Aid. 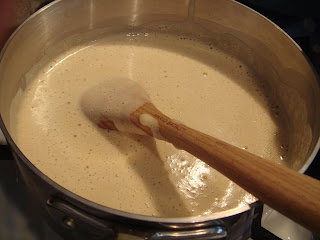 Step four: Here's where things got a bit dicey. I scalded half and half in the microwave and added it to the foamy egg and brown sugar mixture. And I was supposed to heat this custard mixture until it slightly thickens and coats a spoon. 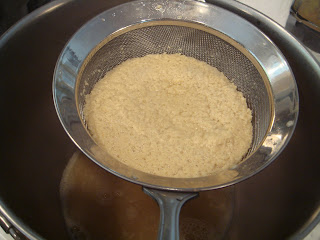 Well, even though I used the thermometer, I overheated the custard and it was so foamy that I didn't really realize it until I put it through the sieve. Oops. You can see the custard curdled, the proteins denatured or unraveled from too much heat, coagulated and separated. This is irreversible.

So I remade the custard. And just heated it until it coated the back of a spoon which was more like 160F instead of 175F in the recipe.

Step five: put it through the sieve, and let it cool. 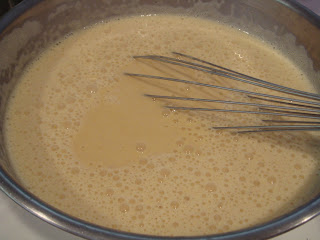 Step six: mix the peach puree and nutmeg and cinnamon in and chill the mixture. I often do this rapidly with a ice water bath. Do not put a hot ice cream mixture into the mixer- it won't freeze. 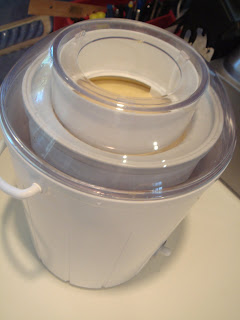 Step seven: I put the cooled mixture into the mixer, with pre-frozen bowl, which freezes and scrapes the mixture to form small ice crystals and give the ice cream an appropriate, scoopable texture instead of making one giant block. Then the semi-soft ice cream goes into the freezer for the final harden. 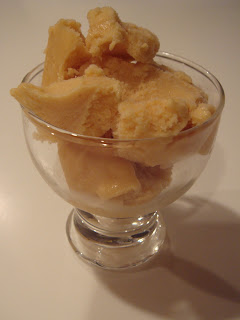 And, the result was lovely. These peaches were very ripe and the blend with the brown sugar, nutmeg and cinnamon said farewell summer, hello fall!
Posted by Lauren at 7:11 AM