From Garden to Plate in Peru: La Gloria del Campo 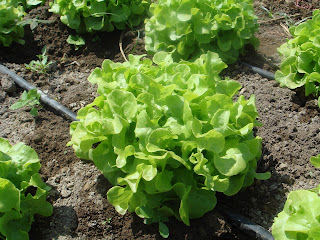 Imagine food that is so fresh it comes directly from the garden... 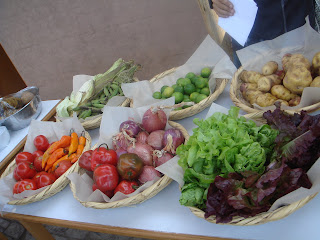 to your dining table. This is the story of La Gloria del Campo, a restaurant that is in the middle of an organic garden in the countryside (Pachacamac) outside of Lima, Peru. 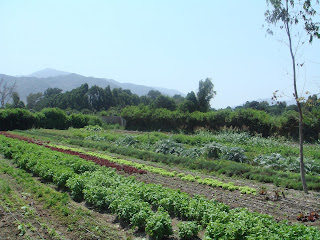 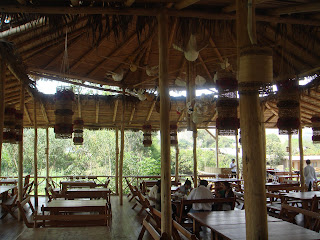 What is particularly marvelous about La Gloria del Campo is the openness of the restaurant and kitchen. Because it rarely rains, the restaurant is not enclosed and provides a beautiful view of the garden around it. 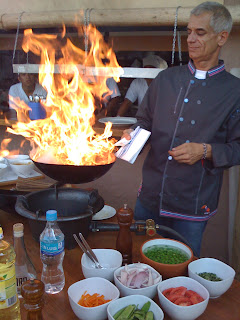 We spent the afternoon with Chef Gonzalo Angosto making several traditional Peruvian dishes. Chef Angosto works as a culinary instructor at the Instituto San Ignacio de Loyola and is a member of Slow Food Nation, which values organic produce and local ingredients. The restaurant uses what it produces but also sells its produce to other restaurants. 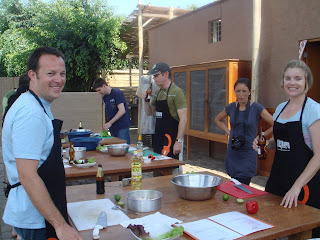 After a refreshing round of Pisco Sours, we toured the garden to see the lettuces, basil, and other herbs and vegetables growing. Everything looked so fresh and we were excited to use such quality ingredients that would have least amount of travel and degradation as they came from the garden to your plate. After the tour, we put on our aprons and got to work. 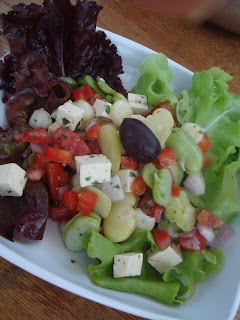 Solterito Salad. We began our cooking lesson by preparing a Solterito salad with tomatoes, fava beans, cheese, onions, olives and chilis. The salad was mixed with the fresh ingredients and mixed with oil and vinegar or oil and lime juice. It was wonderfully fresh and flavorful. 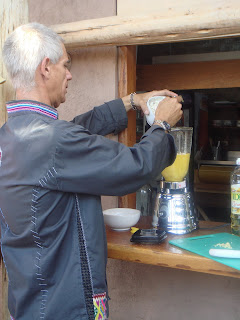 Potatoes with Huancaina Sauce. The second traditional dish we prepared was a Peruvian potato dish with a chili sauce called Huancaina. The potatoes were cooked and sliced into thick rings. The sauce was made by blending raw aji amarillo (chilis that are actually orange in color) and fresh cheese with evaporated milk in a blender. The sauce is thick and bright in color with spicy kick! 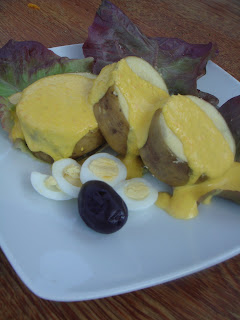 The sauce is meant to be generously poured over the potatoes and garnished with a quail egg and olive. In my attempt to be artistic, I was a little light on the sauce. Justin was a bit more traditional. The combination of the flavorful sauce on a canvas of potatoes was delicious and quite filling. 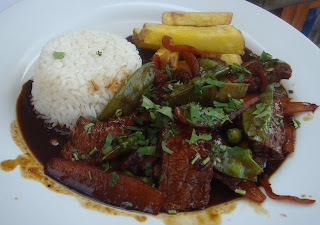 Lomo Saltado. And for the main course, we prepared Lomo Saltado. This dish truly exemplifies the open food culture in Peru that has been influenced by the different cultures that have come to Peru throughout it’s history. This dish is essentially a beef stir-fry with strong Chinese influences in its preparation and ingredients. You will notice the fried yucca and the rice on the same plate as Peruvian food culture readily has multiple starches (corn and rice, potato and rice) in one dish. 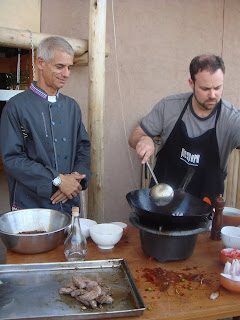 This dish was prepared using an outdoor gas-powered wok – to which Justin informed me that we should definitely consider getting! Actually using this outside makes a lot of sense when you see the amount of steam and flame that it generates.

Chef Angosto demonstrated the preparation and then turned the cooking over to us. Essentially the steps are:
1. quickly cook the meat and set aside
2. add the oil and garlic to release flavors
3. add the onions and tomatoes and chili, followed by fresh shelled peas
4. and then some beef stock, balsamic vinegar, soy sauce and oyster sauce
5. a little Pisco (optional)
6. a smidge of butter
7. and the beef goes back in the pan!

It was scrumptious with such a lovely complexity of flavors from so many cultures. Definitely a dish to try. PicaPeru and La Gloria del Campo gave us a folder with the recipes from the day as well as recommendations on how to get similar ingredients in the US. We will definitely be recreating these recipes in the States! 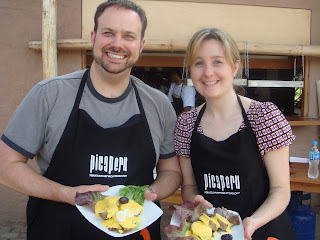 It was a lovely day with marvelous food, great company, and wonderful instructors. We highly recommend PicaPeru and La Gloria del Campo should you visit Peru. And a special thanks to my friend M, Sandra and Chef Carlos and Chef Angosto for rescheduling the tour when our travel was delayed by and entire day. It was so enjoyable and such a delight for foodies like us.