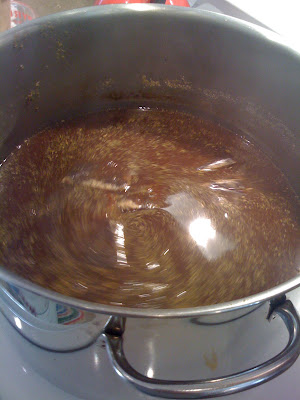 It was an reunion of sorts, coming back to homebrewing after nearly a 15-year hiatus. I can still remember that first batch brewed with my buddy Vince in our early days of college. It was no accident that I started brewing a year before my 21st birthday . . . or that the law of the land allowed one to buy malt extract and hops at that tender age and then turned a blind eye to what may be the results. While my motivations and circumstances may have changed, much has stayed the same. 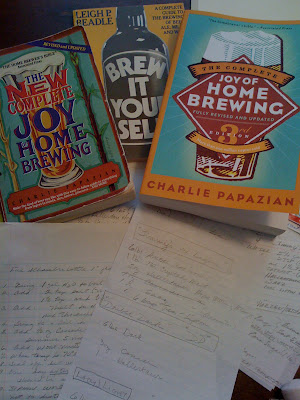 Our reference materials: (left) my copy of JHB, (right) Mick's copy of the JHB latest edition, (bottom) Mick's recipe notes old and new.
After formulating our plan, the next order of the day was honoring the last batch. Mick poured us a dark beer (Scots dark malt, Cascade and Hallertaur hops) with a decade of age on it. To me it had held up remarkably well, still showing floral aromas and very tasty. 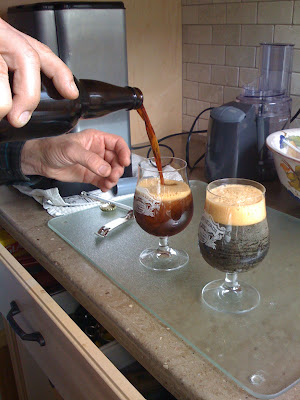 Homebrew in hand, we set about our work. In anticipation of the opening day tailgate we decided to make a lager to celebrate hall-of-famer Jimmie Foxx of the (then Philadelphia) Athletic's. For pop-culture fanatics, Tom Hanks' role of the coach in A League of their Own is loosely based on Foxx. 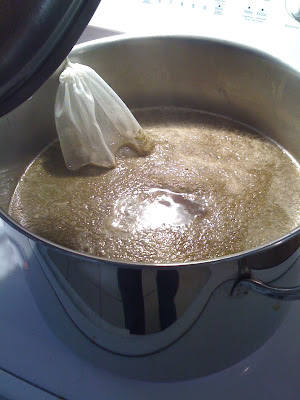 Step one in the brewing process is boiling the wort. In our beer most of the fermentable sugar would be coming from the amber malt extract, however, we wanted to punch it up with a specialty malt. Once we dispersed the extract in about 1.5 gallons of water and brought it to boil we used a mesh bag to steep the lightly cracked crystal malt for about 45 minutes. As a nod to Mick's German heritage we used Hallertaur hops as our boiling hops. Boiling hops are added to extract alpha acids that contribute their characteristic bitterness to beer. 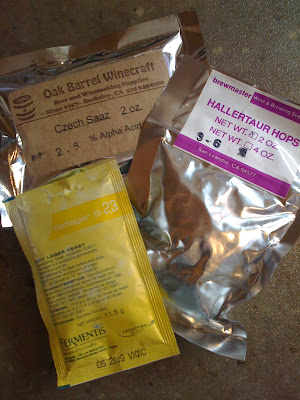 With ten minutes more to go, we added the Saaz hops (hops from my Czech motherland!) as our aromatic hops. Adding hops at this later stage allows extraction of the hop oils and preservation of the volatile aromatics that have been lost from the boiling hops. We also added Mick's signature ingredient: Lipton tea. In previous experience he's found that the orange pekoe has added a crisp finish to his brew. 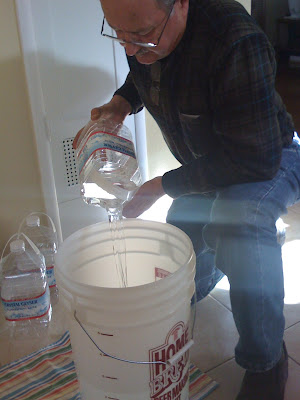 The balance of the water was added to our primary fermentation vessel (6 gallon plastic bucket). Water is the major ingredient in beer and the quality is key. Since the taste is pure and the minerals are balanced, only water from Weed, CA is used in this house. Mick used to haul the water himself, however, Crystal Geyser does the work bottling and shipping these days. The boiled wort was poured through a strainer (the poor man's lauder tun) to remove any remaining grain husks and the hop flowers. Since much of the water was reserved, the mixture of wort and water was cooled to the point where we could pitch the yeast. With all the elements in place we found a safe spot in Mick's garage (55 deg F) where the fermentation process could proceed at lager temperatures. 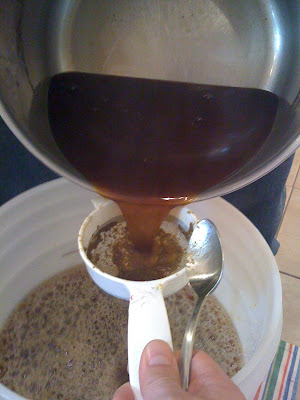 I'll follow up with a second installment to let you know how the rest of the fermentation, bottling, aging, and consuming goes!