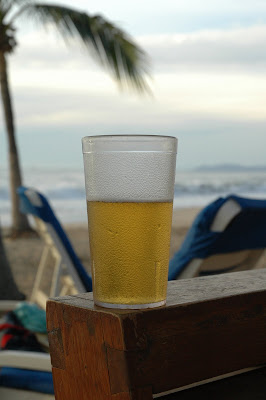 Last week you may have seen me in a Corona commercial. With a brilliant blue sea and sky stretching out, the crashing waves roaring with regular frequency, and the pillow top of a weathered cabana, all that was remaining was the beer. And beer I did have.

My lazy thoughts drifted back to my days in graduate school when I lived with three students who all were studying some aspect of beer (two have gone on to become brewmasters). Late night discussions would turn to the fuel of our late night discussions (the beer) and the chemistry of light struck beer was of course one topic of we couldn't ignore.

For the purists, beer is simple from an ingredient standpoint (water, barley malt, hops, yeast). The role of hops is multi-fold, but it is usually thought of for the flavoring characteristics it imparts--the bitter taste and floral notes. Of the many chemical compounds present in the hop flowers those called isohumulones are some of the prima donnas. If you treat your beer well the isohumulones will perform a delicious dance, if you abuse your beer then will make the entire experience stink. Stink, literally, stink like a skunk.

The term skunky beer comes from the formation of 3-methyl-2-butene-1-thiol (MBT for short), which is chemically similar to what's in a skunk spray (hopefully you've only had to smell this racing down the highway and away). When isohumulones break down and recombine with sulfur groups naturally in the been proteins they form MBT, which is detectable at parts per million levels in your nose. However, a key in making this reaction go is the exposure to light energy that kick starts the chemistry. So, if you can avoid light, you'll help keep MBT out of your beer drinking experience.

I won't advise you to drink in the dark, for many reasons, and a cold beer on the beach is sometimes in order. Take my advice: pour it from a keg or dark bottle, keep it cold, and drink quickly! Then repeat.
Posted by Justin at 5:41 AM