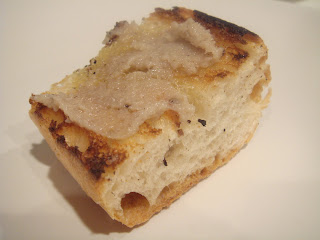 Ok, the Foodspiration foodies are fighting...over pork butter. That's right, pork butter. Pork butter is the one of the new items at Boccalone, a salumeria in the San Francisco Ferry Building whose motto is Tasty Salted Pig Parts. Pork butter is the leftover renderings from lard manufacture (solid bits of meat, skin, etc.) that are blended with olive oil, rosemary, and garlic. They sell it for $5 dollars a pound and other foodies on the web are likening it to rillettes or French potted pork. 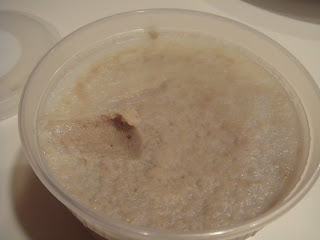 I first tried it spread on a piece of grilled crusty bread and thought it was really indulgent, but wonderfully flavorful with complex savory and meaty notes. Yum! It's nothing to look at as you can see from this photo and you really have to taste it to make your decision. I also like it because it is part of founder Chef Chris Cosentino's philosophy of using as much of the animal as possible-not letting anything to waste.

Then I took it home for Justin to try.

And so I'll let him express his thoughts directly: 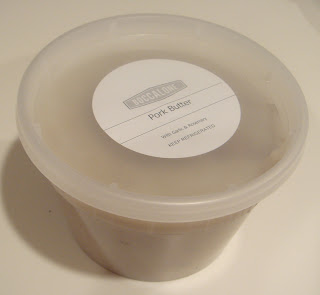 Holy EXPLETIVE. This was over the top. As a bratwurst eating boy from the Midwest, this even violated my pork eating sensibilities. I've been chased by an angry sow on Uncle Fred's farm and I'd love the sweet taste of revenge, but man . . . Maybe I've been in California a few months too long, but I preferred EVOO on the grilled bread. I can visualize the pork butter incorporated into a more complex dish in some general, abstract sense, but not alone.

So, there you have it. Pork butter--sustainably succulent or ridiculously indulgent? Have you tried it? We'd love for you to settle this argument for us!
Posted by Lauren at 8:48 AM