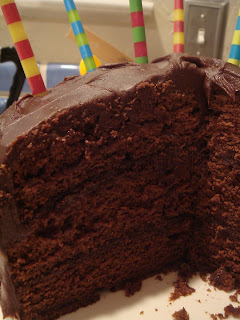 There's nothing fancy about this good, old-fashioned chocolate cake that I made for my dad's birthday. It's actually a devil's food cake with Mrs. Milman's frosting off of the Martha Stewart website- here. 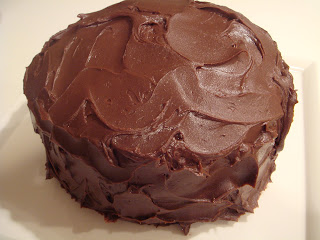 I want to talk about the frosting because it is what drew me to this cake. This recipe is from Mrs. Milman and I actually watched the video of Mrs. Milman show Martha how to make it here. 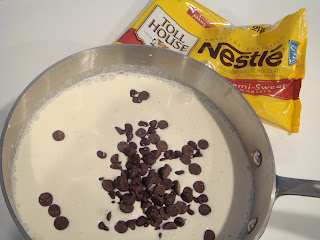 I omitted the corn syrup because Mrs. Milman doesn't use it in her original recipe and stuck to Nestle Toll House as she suggested! This frosting is about indulgence...it's not about health. The recipe is 24 ounces of chocolate chips and 4 cups of whipping cream. That's it. 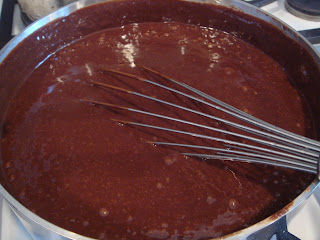 Before I even started making this classic cake, I made the frosting first because it could take several hours to set up. Mrs. Milman is adamant that this recipe is about patience. Low and slow, I melted the chocolate into the whipping cream and let it cook for 25 to 30 minutes until it had thickened. The scientist in me wanted a metric to decide when it was heated enough- a viscosity measurement or a temperature measurement but alas, Mrs. Milman is so experienced that she doesn't need one or give one. So at about 30 minutes, it looked as if it had thickened enough ( still not spreadable but concentrated) and I went for it! 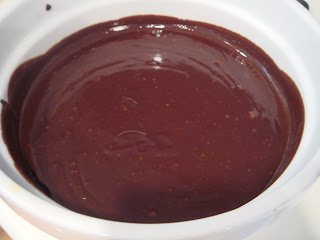 At this stage, the frosting was glossy and gorgeous but still hot and not thick enough to spread. So I put it in the fridge and stirred it every 20 minutes to evenly cool it down and distribute the heat. As you can imagine the outer surface and parts in contact with the bowl chill more rapidly, while the center stays warm- stirring is required. I was a bit impatient and finallly after an hour or so, I decided to put it in an ice water bath. This worked wonders and it set up fairly quickly. 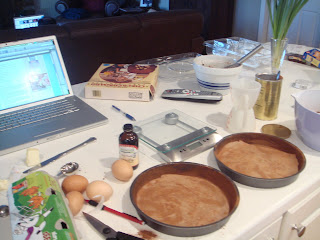 So I moved on to the cake while the frosting was cooling. It took three pans (only two are shown here) and lots of bowls. 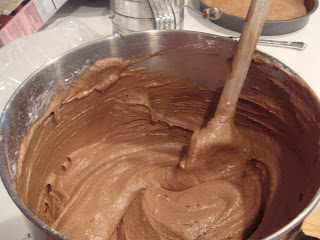 The batter was delicious but I made one classic mistake- when I put it in the oven, I set the timer and forgot to press start! So I had to eyeball the doneness of the cake. I did ok...i could have taken it out about 2 min earlier. 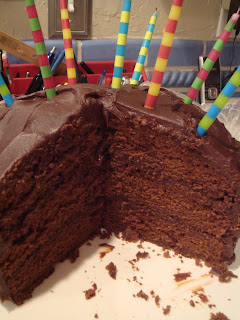 But the cake was still delicious and there was plenty of frosting leftoverm so don't be stingy in between each layer like I was! 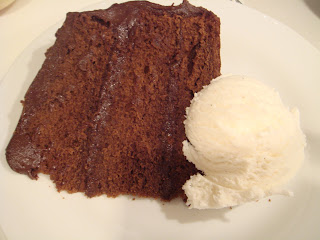 A scoop of ice cream was the final delicious touch. And what did I do with the leftover frosting? I actually melted it briefly in the microwave and put it over ice cream and on top of a gluten-free brownie for my brother who can't eat wheat. Perfect. I'm saving the rest for sauce over a weeknight scoop of ice cream for me!
Posted by Lauren at 7:27 PM