Minnesota State Fair Eats: Everything on a Stick and Then Some! 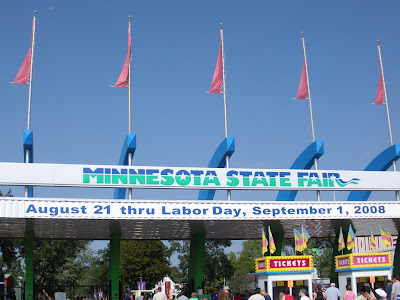 In case you haven't been, the Minnesota State Fair is one of the highlights of the summer for Minnesotans and unlike other State Fairs, *everyone* including all of the news and radio stations go to the fair. This great Minnesota-get-together is about really three things: farming, fun, and food -- especially on a stick (well, not the farming part). 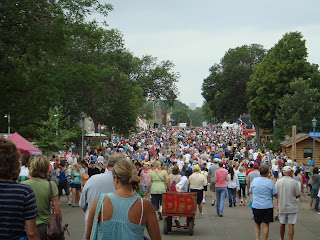 So in the spirit of being food adventurists, we joined the weekday crowds and embarked on a mission to:
1) discover the best and the worst of this year's fair food
2) try as many things on a stick (there are supposedly 55)
3) celebrate Minnesota agriculture including Princess Kay of the Milky Way and her life size butter sculpture.

We took our mission seriously as Justin, myself and Justin's dad readied our taste buds to evaluate as much fair food as we could stomach. For each food, we tasted, took a photo, wrote down the cost and gave it a score. Here are the results:

First Place: Bacon on A Stick from Big Fat Bacon 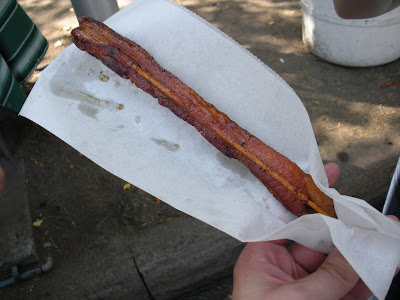 As the "Bacon Babes" will tell you, this deliciousness is due to a thick piece of bacon with a maple syrup glaze cooked to juicy, hot perfection. This new-to-the-fair booth was all about taste but they kept it real with this health acknowledgment: 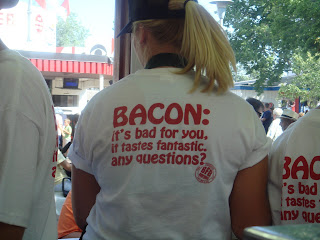 and they had their marketing together... 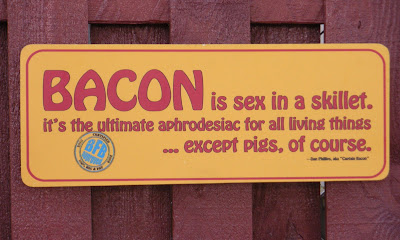 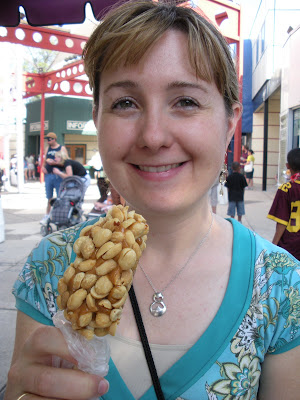 Forget Pearson's or any store bought version, this freshly made nut roll had soft nougat, chewy caramel and crunchy nuts to go. You could get peanut or pecan or cashew- even covered in chocolate! But all we needed was the classic- in fact chocolate would have overtaken the nutty goodness. We ate it throughout the day until it was gone because we couldn't get enough. 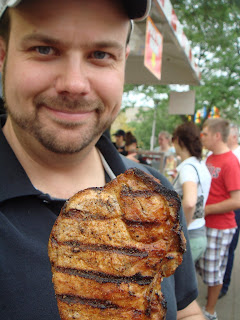 This classic fair food is known for its juiciness and its outstanding seasoning. We found a bottle of the famous seasoning at home (Justin had bought at a previous fair) and determined some of the secret ingredients: salt and MSG! Although some of the romance is now lost we have to admit it still was tasty!


Most Creative Foods of 2008
Now we aren't saying these are the best but they sure were fun to try. 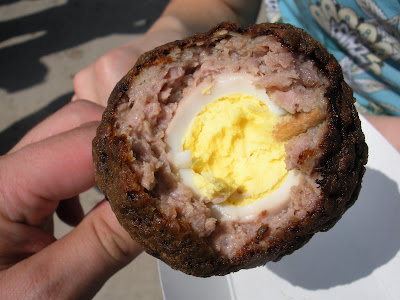 Hmm, a hard boiled egg wrapped in sausage (!!!) dipped in breadcrumbs and deep fried. And with special horseradish sauce. This was creative and fun to look at after you bit into it. 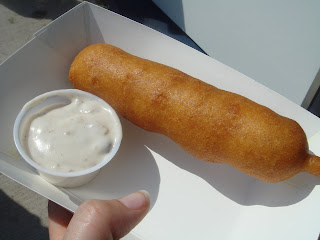 Yes, this was not new to the fair thanks to Ole and Lena but it sure was interesting. Minnesota is the land of hotdish -- there's actually a map of hotdish by region. While this looked like a corn dog or pronto pup with a side of cream of mushroom soup, this detailed diagram explained it all. 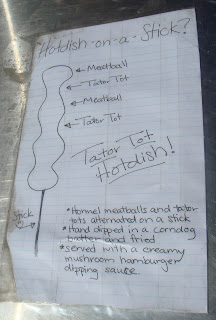 "Ole" explained that we needed to push up the hotdish and dip every time for maximum Minnesotan delight. The State Fair is known for this signature Minnesotan dish and we loved it . . . until the next day when we went to Eichten's Cheese 'n Bison restaurant in Center City, Minnesota and the unthinkable happened. We ordered their cheese curds on a whim (they make their own cheese). They looked different, sort of irregular and in clusters. We ate them and uttered the biggest Minnesota dairy blasphemy: THESE ARE BETTER THAN THE STATE FAIR CHEESE CURDS!!! So help me, it was true. Even Justin's mom agreed. I don't think we had truly tasted a cheese curd until then. The amorphous fried shape due to the just-dipped and fried method with a quick dip in flour first then the batter. The cheesy, greasy, crunch deliciousness of it all. WE WERE IN CHEESE COMAS. I think we possibly still are. 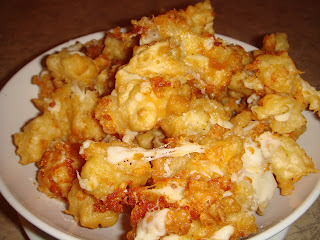 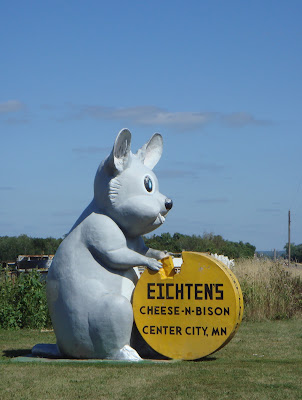 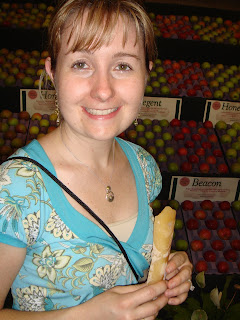 First of all the fair itself is a heckuva deal at $10.00 for admission. But this apple cider freeze made from local Minnesota apples was sooo good on a hot day. You had to go into the Agriculture building by the apple display to get it. Yum! 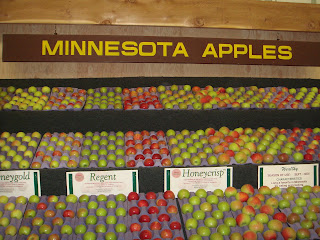 Second Place: All You Can Drink Milk 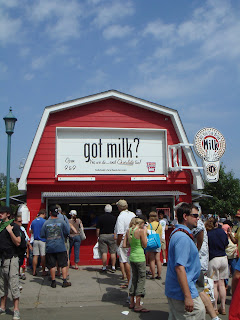 It used to be a quarter but even a dollar is a bargain for 1% chocolate milk... 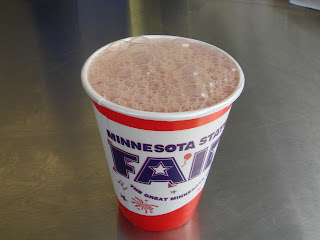 or 2% regular milk as much you can drink...foamy and dee-licious 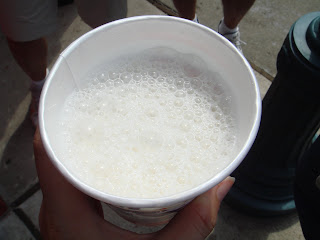 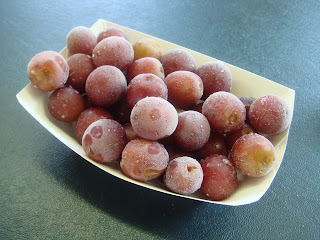 These were just plain tasty, refreshing, and healthy. They were excellent palate cleanser after the disappointing gator on a stick that we had just eaten. Can we make these at home?

We had some high hopes for a few things but they just missed the mark. 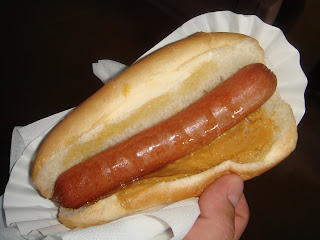 There was peanut butter in inside the dog and slathered on the bun, but frankly (pun intended), it was boring and looked a little gross. You could hardly taste the PB difference and it was very forgettable. 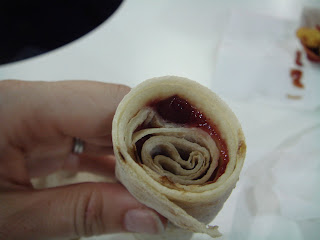 Again, just too bland. I loved watching the women roll it up fresh and even admired their lefse earrings, but this potato pancake had no pizzazz -- lingonberry or not. 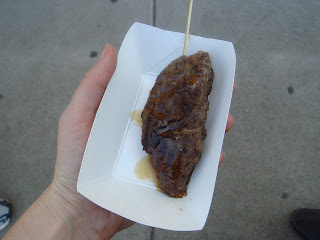 This was terrible. The ground meat patty could have come from my microwave and the sauce was no help. We should have known this was a bad deal from this sign: 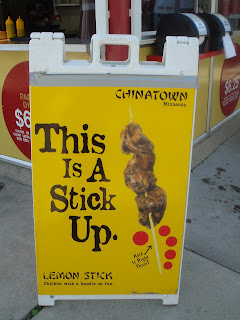 This was a stick up, because we were robbed. We want our stomach space back!

So how did we do?
We tasted 19 foods, 11 of which were on a stick. We didn't get sick and we weren't overly full- yes, we threw some food away. Not too shabby!

BUT WHAT ABOUT THE BUTTER SCULPTURE??? 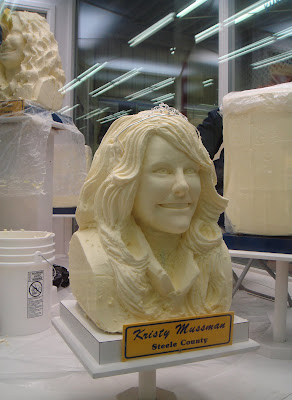 Oh yes, we found Princess Kay of the Milky Way and her entourage. They were in the process of being sculpted by hand from 90 pound blocks of butter. What they do with that butter after the fair is their business. 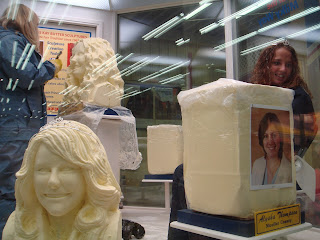 And as a bonus, after eating the terrible terayaki ostrich on a stick, we spotted the Kolacky Queen and Princesses. In case you aren't familiar with this traditional fruit or jam filled Czech pastry, you should seek it out. The Royal group was kind enough to grant us a photo and hear a bit about Justin and his dad's recent trip to the homeland. 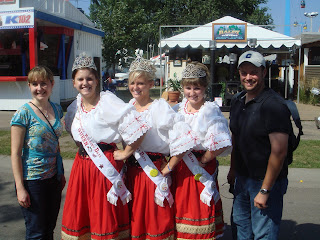 It was an amazing day!! Until next year! 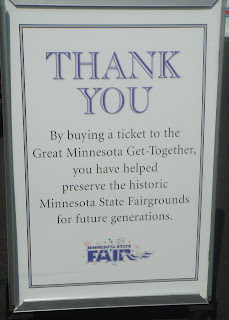