The "Russian Roulette" of Peppers 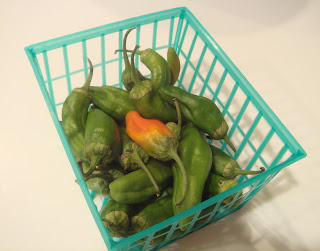 We came, we played, and our mouths were on fire! How can something be so delicious and yet amazingly hot??
Introducing Padron peppers, small green peppers that have been in our FarmShare box from Riverdog Farm. These aren't your ordinary peppers. Most are mild but approximately every one in ten are really spicy. Not kind of spicy, but really really spicy. Padron peppers are originally from the Padron region in Spain and called pimientos de Padron. 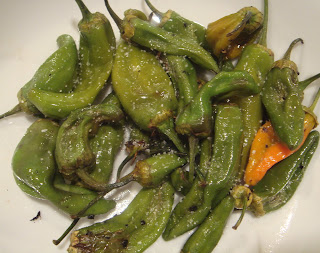 So, we prepared these peppers in the recommended way: in a pan with olive oil. Once the peppers were charred, we sprinkled them with coarse salt. And here's where it gets fun...I took a bite of one and WOO HOO it was hot! Justin's first few peppers were mild ones and so when I saw him almost put a large one in his mouth- I stopped him in the last moment. Good thing because it was a doozy!! My recommended method is to bite off the tip for a little pre-taste.
What causes the spiciness in chili peppers? Capsaicin is the name of the spicy component in chili peppers and the variety in spiciness is due to different levels in the peppers. Did you know that there is actually a spiciness scale for chili peppers? It's called a Scoville Scale and if you click here you can see where different peppers fall on the scale.

And what about that orange pepper? Was it the hottest of them all? No, actually it tasted quite a bit like a red bell pepper.
Posted by Lauren at 10:19 PM