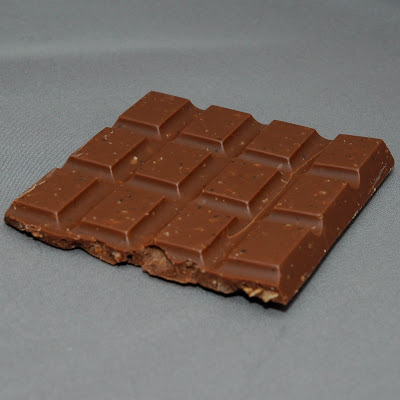 Our food scientist friend, Aaron, recently gave us a Sizzling Bacon Bar, a milk chocolate bar embedded with both bacon and "popping candy", known non-generically as Pop Rocks. Overall, the popping that came with eating the chocolate was fun, but the chunks of bacon that got caught in my molars was not as appealing.

You may wonder what is the science behind the magic of Pop Rocks? Students of the confectionery sciences should go directly to the source and review US Patent 4,289,794. In that work (1981) food scientists at General Foods described an improved the process that built on the prior art in order to maximize the popping sensation in the candy.

The basic process is fairly straightforward: a sugar blend is heated to a molten condition, quickly mixed with gas under pressure, and then cooled and solidified under pressure. You can imagine the resultant product as a hard sugar glass (like brittle) that is broken into tiny pieces, but with each shard containing many tiny pressurized gas bubbles (usually carbon dioxide). When the sugar starts to dissolve in your mouth the walls surrounding the bubbles break down and the pressure releases yielding the characteristic 'pop'.

The scientists at General Foods perfected this process by establishing heating and mixing conditions (near 280F) that created fairly large gas bubbles (most between 300-350 microns in diameter). A sensory panel helped establish the optimum conditions for creating bubbles that would maximize this popping sensation.

I wonder if the original scientists envisioned their invention being practiced once day as an inclusion in a chocolate bar also containing bacon?
Posted by Justin at 9:30 PM