Al's Breakfast is a Minneapolis breakfast staple located just off the University of Minnesota campus in the Dinkytown neighborhood. Don't be fooled by the sign in the window as this is the sole branch of the restaurant and here since 1950. My brother and I often make a run to Al's when I am in town and this Christmas holiday trip was no exception. NB: If you are in Minneapolis and want to search out this spot don't just type "Al's" into your GPS as you may be sent to Al's Place, which is NOT where you want to go unless you want to find yourself across the street from one of Minneapolis' downtown strip clubs.

Al's Breakfast has a lot of fans and has even won a James Beard Award for America's Classics in 2004, however, this place is about as down to earth as you can get. One of the Al's endearing features is its cramped space. It has only 14 red vinyl stools positioned along a long counter. Typically, a single line of bodies forms only inches behind the row of seated customers and stretches out the door (and on the weekends down street). 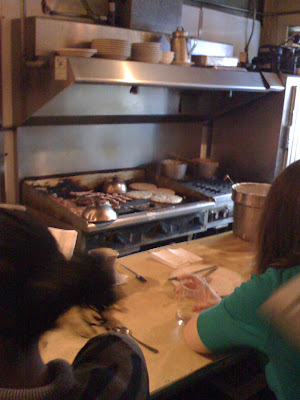 View from near the door: griddle where the pancakes, hash browns, breakfast meats, and poached eggs are made. If Al's has a control center this is the it . . . the counter staff take orders and call them to the principle cook here. The main cook calls any egg dishes back across the restaurant to the second cook in the back of the house.
At Al's the menu is unchanging and the waitstaff is no nonsense. If you use a cell phone you may be yelled at. You will be directed to your seat by your position in line. Even after you have a spot it may not be yours for long as when when additional spaces open up you may be asked to slide down to fit groups of people together. If you are a "single" you may be lucky enough to jump a few people in line in order to keep the seats filled. 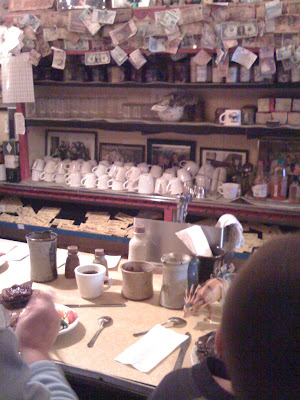 Al's decor -- no wasted space with various artifacts and foreign currency affixed on the walls; just below the coffee cups you can see a shelf of small books with names on the front that allow you to pay another way . . . you can buy a tab and it will wait for you behind the counter.
The food is prepared short-order style. Everything on the menu is delicious and you can find whatever you are looking for be it carbs (the pancakes and waffles rock) or be it protein (the various cheesy egg dishes boarder on the sublime). A short stack of "wally blues"--two walnut/blueberry buttermilk pancakes--can certainly satisfy, but I personally favor the blackberry buckwheat pancakes when I am going in that direction. However, my brother and I both went eggs. 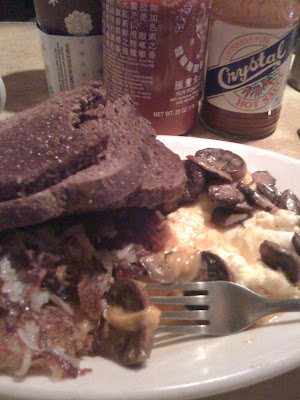 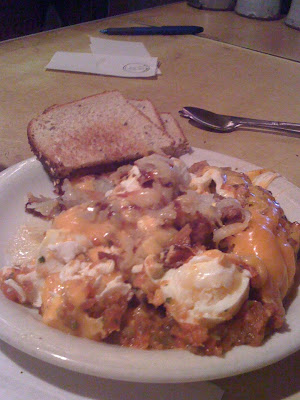 Our breakfasts: (up top) the "Spike" with a side of hashbrowns and rye toast, (down below) a three-egg "Jose" with dark toast.
When I'm eating eggs at Al's I favor the "Spike". This dish is a two egg cheddar scramble with generous amounts of garlic and covered in mushrooms. I get liberal with the hot sauce and then don't look back. My brother always orders the "Jose" with a third egg. The Jose has the hash browns built right in as the base for poached eggs, melted cheese, and salsa. While the grill is open for all to view, you may not want to watch how much oil gets poured on the hash browns as I have know this to have been concerning to some. 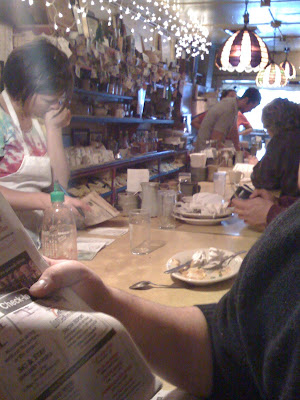 With our breakfasts decimated, we take a very quick glance at the newspaper.
Al's isn't exactly a place you can hang out after your meal and digest. While the staff will always keep your coffee filled, you'll quickly start to feel the piecing stares of the next customer in the back of your head. Since the hungry mob is literally only a few inches away it is sufficient motivation to move on, belly full, to the rest of your day.

As I said, Al's has many longtime fans and even its own reference on Wikipedia (entry on Al's Breakfast). My close friend and once Dinkytown roommate Vince is another "Al"-ophile. Vince wrote in inaugural issue of his zine Breakfast an article entitled "Getting Jiggy At Al's Breakfast" (does this title date it for you?, i.e. to sometime back in the late '90s). Zines are like amped-up blogs in print . . . small-circulation, non-commercial, creative works. When Vince got Breakfast going, the weblog format really hadn't caught on, but his "zine about your favorite meal" certainly inspired me, especially since I once got to contribute under the pseudonym Dr. Food.

Lovers of Al's Breakfast Unite!
Posted by Justin at 12:37 AM