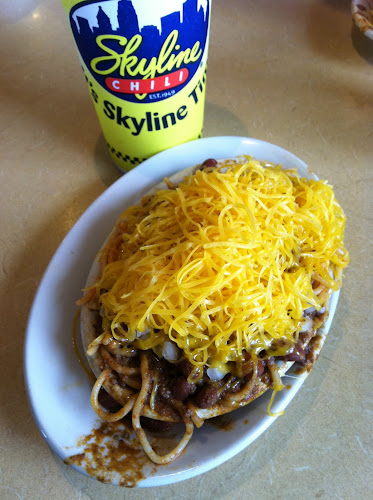 On a recent trip to Cincinnati I asked one native about it as a food town and she framed her answer with the idea that "Cincinnati doesn't know if it is in the North, South, East or West" (the local airport is in Kentucky) so their cuisine pulls a little from all these directions. It seems that the residents are equally conflicted about a local staple -- Cincinnati Chili. You hate it or love it . . . if you love it then you likely have an opinion about if it is served better at Skyline or Gold Star.

Urged on by some and warned by others we ventured out to the local Skyline. If you are from anywhere else then this dish will likely bend your definition of chili. The meat is simmered in a spice blend containing cinnamon, chocolate, cumin, allspice (among other things) and served in a watery sauce over a pile of spaghetti and topped with a huge mound of shredded cheddar cheese. If you stop there you've got what is called the "three-way." Adding onions will get you a "four-way" and the addition of beans is a chili "five-way." Nixing the onions, but adding the beans is a "four-way bean" -- got it? 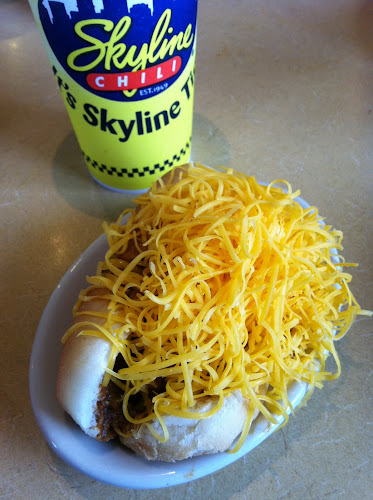 My overall impression of our lunch time meal was of flavorful, seated fast food. You can't effectively eat the dish in your car, but since they key components hot and ready there is little lag time from order to assembly to your table. I had a small order of the chili five-way and chased it down with a coney dog and a diet Dr. Pepper. It's hard to tell but there is a chili dog under that giant pile of cheese, making me wonder if these foods were really vehicles for shredded cheese consumption? This thought was further fueled by the same shredded cheddar appearing in the hotel breakfast buffet near the egg station.

Have you tried Cincinnati chili? What did you think?
Posted by Justin at 7:14 AM